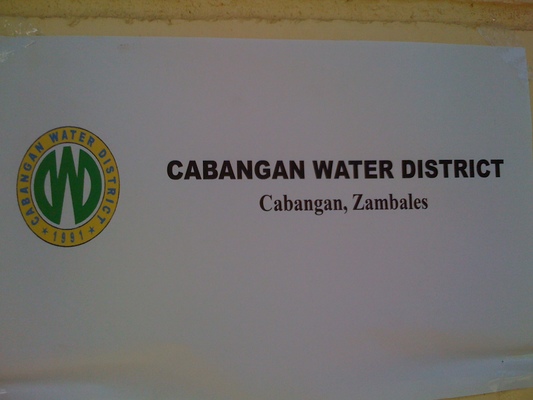 The Cabangan Water District (CWD) was formed on December 16,1991 by Honoroable Mayor Jesse A. Mendigorin of Cabangan, pursuant to Presidential Decree (PD) No. 198, as amended by PD 768 and PD 1479, otherwise  known as the "Provincial Water Utilities Act973".

CWD was awarded the Conditional Certificate of Conformance (CCC) No.  505 in 1991 by the Local Water Utilities Administration (Lwua). This CCC is the accreditation of LWUA to a newly formed water district to operate under the standards specification.

The primary objective of the water district is to provide and supply safe, adequate, reliable, and economically viable water services to its constituents, particularly to the poorest of the poor.

The water district started with the appointments of five (5) members of the Board of Directors and the designation of a General Manager.  Through the collective efforts of Mayor  Mendigorin, the Board of Directors and the General Manager, CWD acquired a grant of almost  Php  7 million fron the German Government, and was granted a loan  by the  LWUA in the amount of Php 4.5 million, more or less, without collateral. The said project was implemented by the German government through the Kreditstanstalt Fur Wiederaufbau  (KFW) Pinatubo Project in 1994.  From the said funding, the CWD was able to construct a well, a pumping station, an elevated reservoir and a 500m length of transmission line which was completed in MAy, 1996.  The project was able to  supply the need of six (6) barangays.

In June 1996, the CWD was fully operational with only four (4) personnel, including the General Manager.

In November 2004, the CWD was granted another loan in hte amount of P  14,478,000.00 under the Provincial  Town WAter Supply Program Component III Package funded mainly by KFW for its expansion program to seven (7) barangays.  The project was completed in September, 2006 and fully operational in January, 2007.

Another loan was granted to CWD under the NLIF-DOH Loan Fund which is 50% garnt and 50% loan in the amount of Php 15,000.000.00 for the improvement of water supply system.  The project was completed last December, 2013 and fully operational.

At present, the district is supplying safe and potable water to sixteen (16) barangays on a 24- hours service. It has eight (8) employees, three (3) regualr, (2) casual and three (3) job order  under the stewardship of General Manager Honorio L. Dilag, Jr. and its Board of Directors.  The CWD  has a total of 1,630  service connections.

The Cabangan Water District is a public utility service provider continuously strive to meet the needs of its concessionaires for tatl value by offering a safe, affordable service to the community.

The CWD aims to provide and supply safe, adequate, reliable and economically viable water services to its constituents.

1. Exercise maximum professionalism and courtesy toward our concessionaires.

" It is our Commitment to provide excellent Service "